Wrestling with the Wrath of God

But they made light of it and went away, one to his farm, another to his business, while the rest seized his slaves, maltreated them, and killed them. The king was enraged. He sent his troops, destroyed those murderers, and burned their city.

Today’s Gospel reading is one of those portions of scripture which should cause reasonable people to pause and ask – “Jesus said what?” It’s a hard story to hear. A king hosts a party and invites guests to attend, but when they refuse – “make light of” – the invitation, he insists upon their presence. When the guests rebel against the king’s insistence, the king responds by killing them and burning down their city. The violence doesn’t seem proportional or even necessary. The discomfort of our story is further compounded when the king kicks out another guest, one of the random people he begged to attend, because the guest isn’t wearing the right clothes.

Now, there is much to be said about the hyperbole of parables – the way Jesus paints a dramatic picture to shock his audience into response. There is also a case to be made about metaphor and deeper meaning. After all, the Gospel of Matthew was written after the sacking of Jerusalem and the utter destruction of the Second Temple, one of the most traumatic historical events for the Jewish community. For them, the idea of a vengeful ruler burning a city wasn’t theory. It was memory. The entire dispersed community of Jews must have tried to make sense of a level of devastation that many of us can’t even imagine. The Jewish community that followed Jesus might have interpreted these events in light of an apocalyptic vision – God’s judgment against a corrupt system that failed to honor their sacred traditions. And this judgment wasn’t just pointed at others, but inasmuch as the wedding guest was kicked out for not wearing the correct clothes, they would’ve been aware that the judgment of God could easily land in their own laps as well. Being “called” wasn’t enough. One had to respond to the call in order to be worthy.

Even so, this parable is troubling. For Episcopalians who often pride ourselves on welcome and hospitality, hearing a parable about compulsion, demands, worthiness, and judgment can be hard to hear. What do we do when we are faced with a God filled with wrath? How do we hold this image of God while also holding the image of a God who is love?

Maybe we begin by holding these images, not allowing one to overcome the other, but allowing ourselves the space to live in the tension of a God of wrath and a God of love. In reality, God is complicated and mysterious. If the arc of scripture teaches us anything, it is that God always resists our futile attempts at domestication. It is how God can be both gentle shepherd and commanding general, loving father and nurturing mother, thundering cloud and a “still, small voice.” God is complicated and rather than attempting to iron out the wrinkles, I wonder what we might learn by living in the untidiness of it all.

Our world is untidy, to say the least. Puerto Rico, the U.S. Virgin Islands, and many other places in the Caribbean are facing unthinkable humanitarian crises after a series of devastating hurricanes. Wild fires rage in California, threatening to burn whole cities. Our nation is still in disbelief after a terrorist shot and killed dozens of people and injured hundreds of others. This is just the news of the past two weeks, to say nothing of the personal struggles that many of us carry with us all the time. Perhaps an untidy world needs an untidy God to help us make sense of it all, or at the very least to walk with us through the mess. Perhaps a simplistic faith is simply incapable of holding both challenge and the idol of one-dimensional God, not unlike the Golden Calf – a God we can create, see, carry, and control.

While this untidiness might be uncomfortable, our faith is deepened when we ask the hard questions, when we wrestle with determination, when we persist beyond simple answers and half-truths. But this wrestling is optional. There are many, dare I say most, who are satisfied on the surface. For them, ignorance is bliss. But I wonder what lies just beneath the surface of faith? What joys and sorrows? What gifts and challenges? What revelations and mysteries? Musing on the blessings found only in the dark, Barbara Brown Taylor writes beautifully about what she calls “spiritual bypassing,” avoiding discomfort instead of allowing that discomfort to be the “best, most demanding spiritual teachers we may ever know.”[1] She asks a searching question, “Who would stick around to wrestle a dark angel all night long if there were any chance of escape. The only answer I can think of is this: someone in deep need of a blessing; someone willing to limp forever for the blessing that follows the wound.”[2]

Questioning saved my faith by deepening it. At some point simple answer and platitudes stopped working. As a young man struggling with identity and belief, I needed something more than what I had been given. I wish I could say that asking questions resulted in tidy answers, but they actually tended to lead to more questions. It often feels like I am lost in a maze, except that our journey with God might be more of a labyrinth – one way in and one way out. At least for me, the creeds, the Book of Common Prayer, and the faith passed down to me by countless ancestors often function as large stones of faith upon which I might rest as I attempt to traverse the often torrential current of life. Even still, the journey switches back and forth, curves around and around, and can sometimes feel as though we are walking in the opposite direction of our goal. But, to borrow from Rachel Held Evans, “No step taken in faith is wasted, not by a God who makes all things new.”[3]

Life is messy and living a life of faith doesn’t make it easier. Rather than provide avenues of ease, faith provides us with eyes to see and a heart to experience life’s challenges through the perspective of the Paschal Mystery – the death and resurrection of Jesus, a pattern that emerges in our lives over and over again.

Death and resurrection, and here we are hanging somewhere in the middle.

I seem to recall someone else hanging here too.

This week at Saint Paul's 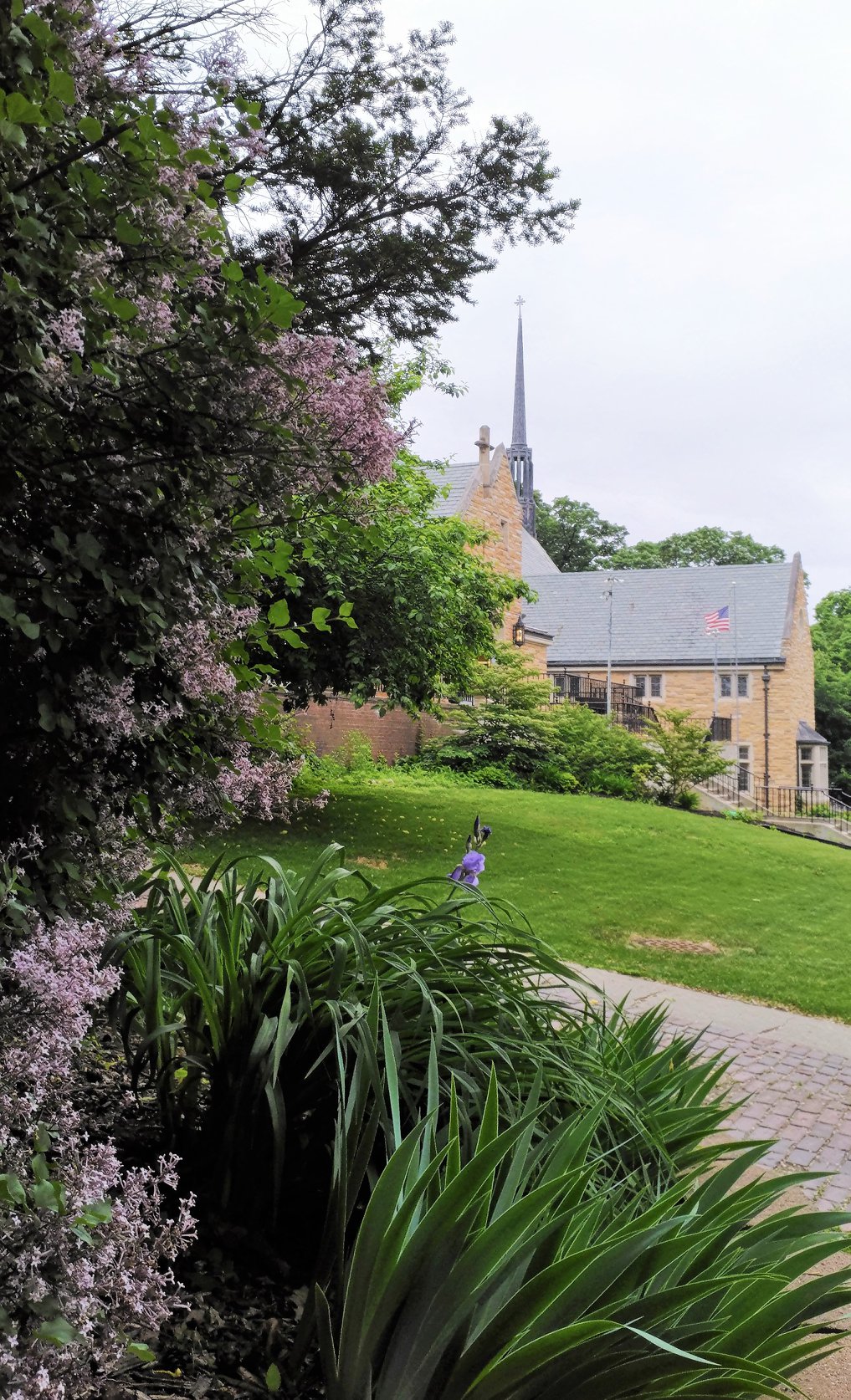 On the third Monday of the month, join Saint Paul’s staff on the green outside the Undercroft with your own bag lunch, beverage, and folding chair to enjoy in-person social […]

REOPENING of Saint Paul's Church 27 June at 10:00am - click for details

God’s peace be with you! Rejoice! Rejoice! Given the decrease in COVID-19 cases in Minnesota and the increase in the number of people who have been vaccinated, we are excited to announce the re- opening of Saint Paul’s Episcopal Church building on Lake of the Isles on Sunday, 27 June at 10:00AM. We will have a beautiful and joyful worship with Eucharist, and coffee hour to follow. For those of you who are unable to come to the church building, a live Zoom stream will be available. Look for the Zoom link in the E-pistle.

Saint Paul’s COVID-19 Response Team Members (Mark Anderson, Steve Riendl, Angie Paulson, Jacob Manier, Rev. Janet MacNally, and Rev. Ramona Scarpace) have put together guidelines for worshiping together in-person. These guidelines are based on information from the Centers for Disease Control, the Minnesota Department of Health, and the Episcopal Church in Minnesota. The team asks that, in the spirit of loving God and neighbor, everyone follow the guidelines as listed below. If you have any questions or concerns about these guidelines, please contact Junior Warden and COVID Response Team Chair Steve Riendl at sriendl@stpaulsmpls.org.

Creating a Welcoming and Safer Environment

We look forward to seeing everyone on Sunday, 27 June!